Instead of "Weekly Favs" this week...JSU to Little River Canyon, to DeSoto Falls :)

Whenever I photo a family trip, I always debate...blog or just a facebook album. Blog is usually the easiest way to share a lot of photos and explain what we did...Not that it's so great that anyone cares, but if you are interested in taking a weekend trip and cheap sometimes the experience of others is beneficial. We go just about the cheapest route possible...you can add so much more and spend more, but we strive for cheap lol and have seen a lot of great places :) UNA/JSU football first...then DeSoto weekend. We are definite supporters of UNA football. We have season tickets and attend most of the games. Our oldest daughter attends Jacksonville State University. Camping at State Parks have become a new Sumner thing...mainly it's a cheap way to see places. I looked to see what all was on that side of the state and found DeSoto State Park. Since it was full, we stayed at Tranquility campgrounds (definitely quiet and we enjoyed the solitude). My parents have just recently invested in a camper and expressed interest in Little River Canyon so our little weekend trip emerged. We had a great time seeing Britt at the game, even if we didn't stay the entire game and UNA lost :) She seems happy and it does our heart good to see her happy. We asked her to join in on Friday and Saturday but she would rather go see the boyfriend and his sister in Tuscaloosa...hmmm :) It's ok, we get it, she isn't a camper and we won't force her to be :) 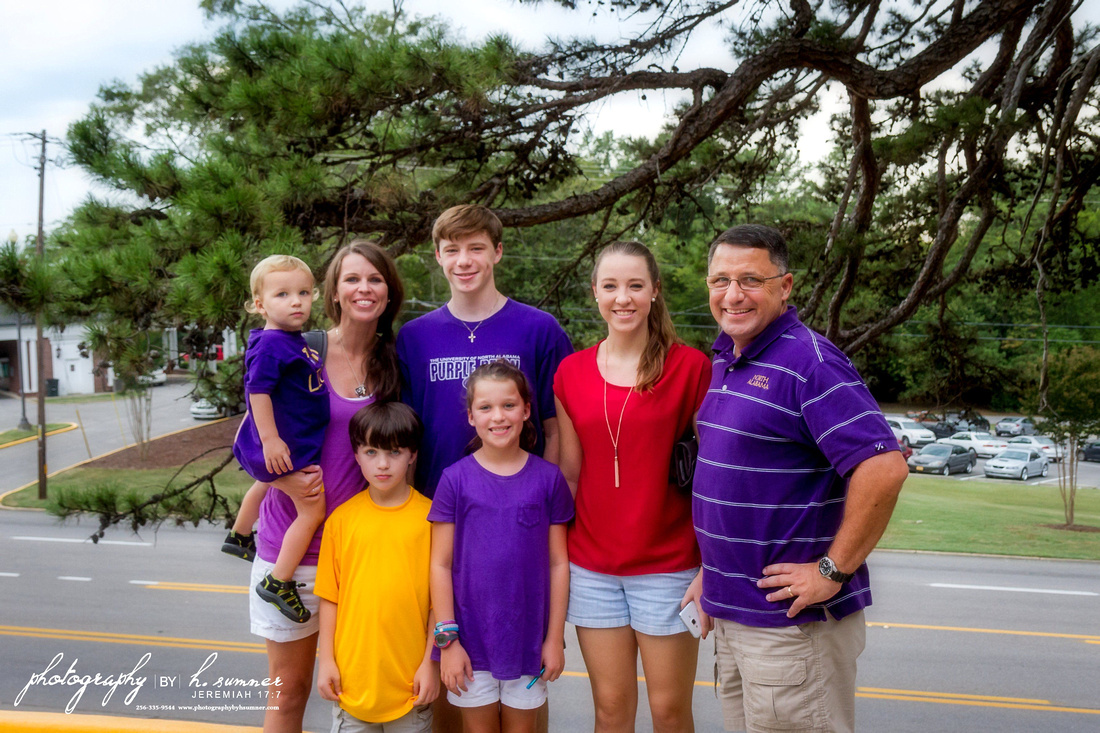 Joseph loves the band. We sat behind the band at the game and then when they left for half time he had freedom to roam the bleachers a bit...Just a little bit.

We arrived at camp later after the game. It didn't take long to set up camp. Tranquility is along county road 165 (maybe highway...I don't know). It's about a 20 minute drive to Little River Canyon National Preserve. We woke up that morning and went to explore the Preserve with the parents...well see Little River Falls and then we hiked to Martha Falls while they drove and explored the canyon by car. There is a parking lot that you can take a short hike down to see Little River Falls. My little photographer had her camera too...I'll have to upload her album soon :) 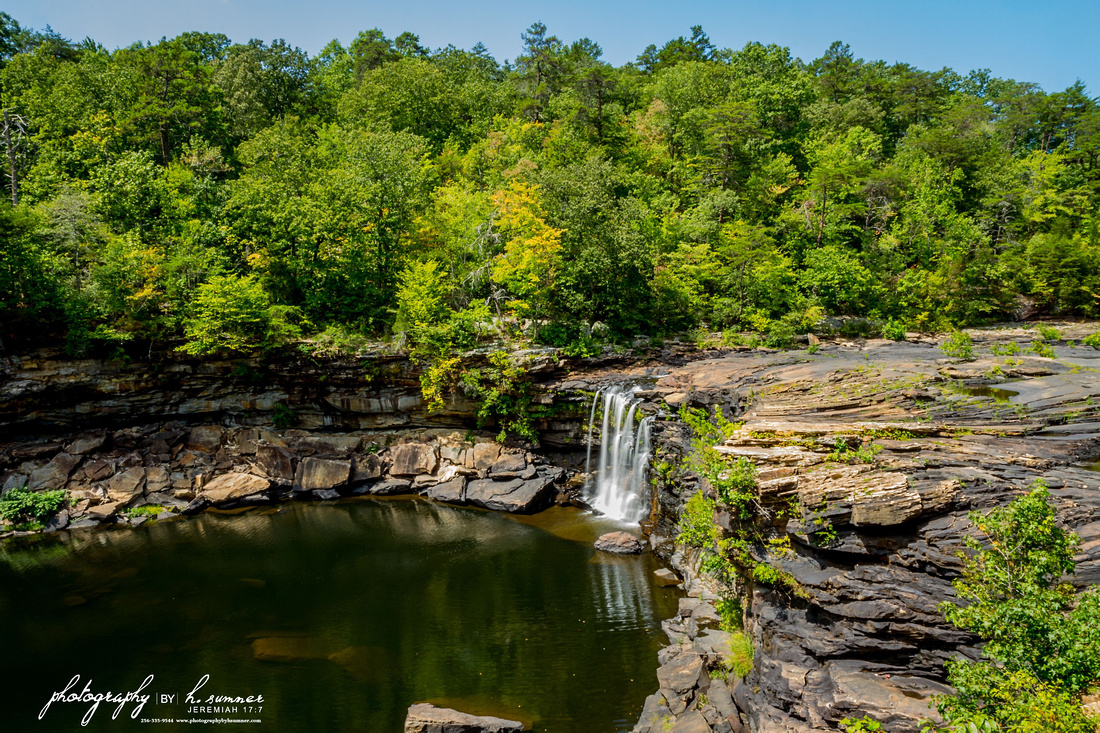 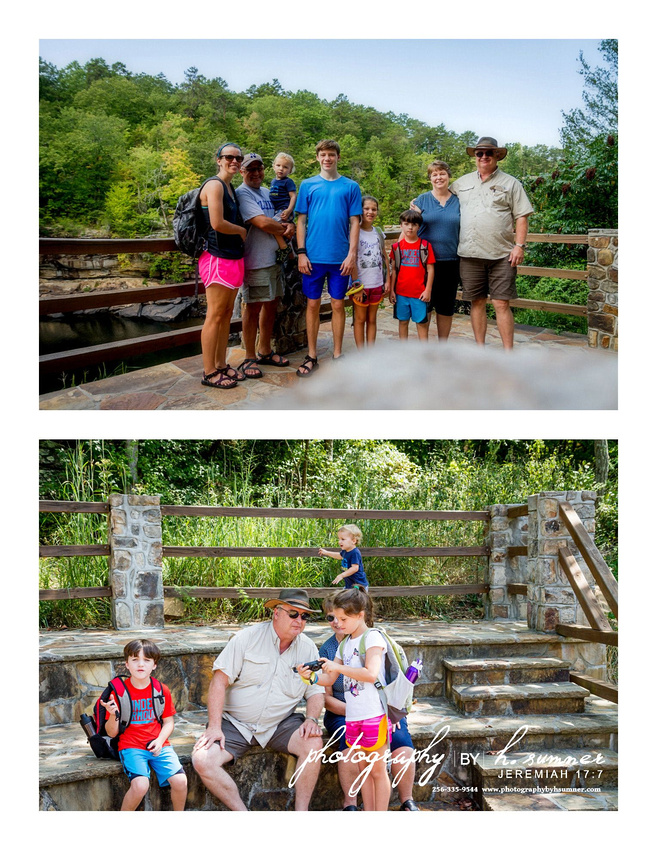 We then hiked the 3/4 mile trail down to Martha Falls. The trailhead starts at the parking lot although there is another parking area shortly down Highway 35 with a shorter but steeper trail (from what I've read, we didn't do the shorter one). The trail was rocky but not too difficult except the last part. The last part of the trial, down to the actual river bed, was the hardest and you can't get around it no matter which trail you take. Once to the bottom you take a left and it will dead end into Martha's falls (hippie hole) and the cliff overhangs that people jump from. Follow along to the right of the "rim" and you can enter the water that way. It is a fabulous swimming hole. I have no idea how deep but definitely way over my head and deep enough in places to jump from the cliffs. The kiddos had a great time. Definitely worth the hike. Joseph enjoyed a nice little nap on the way back :) 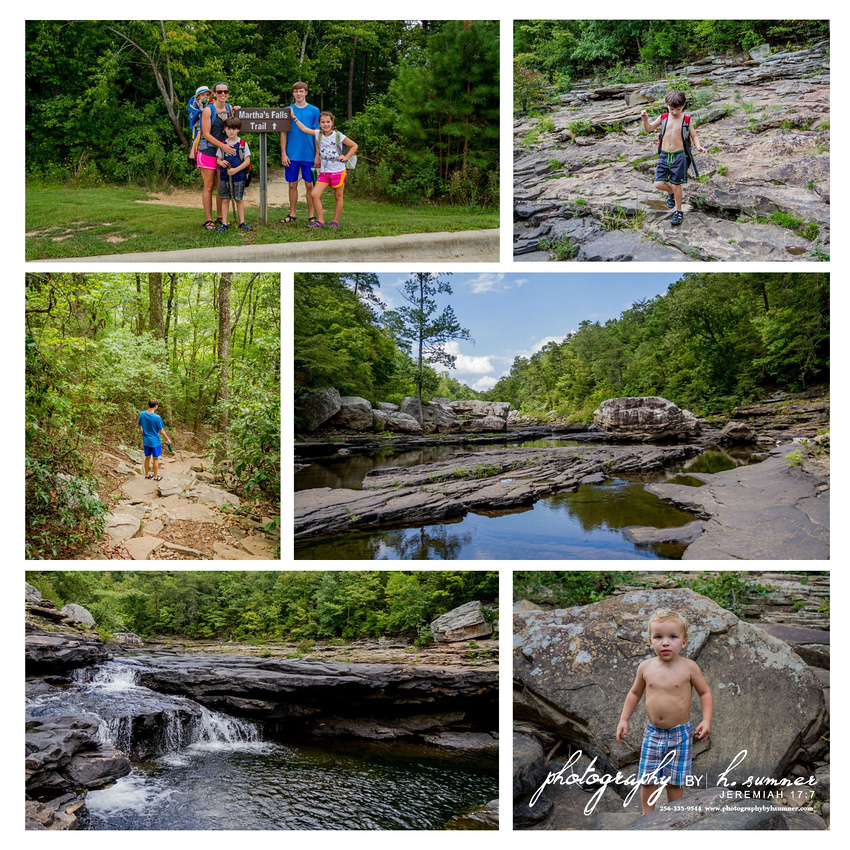 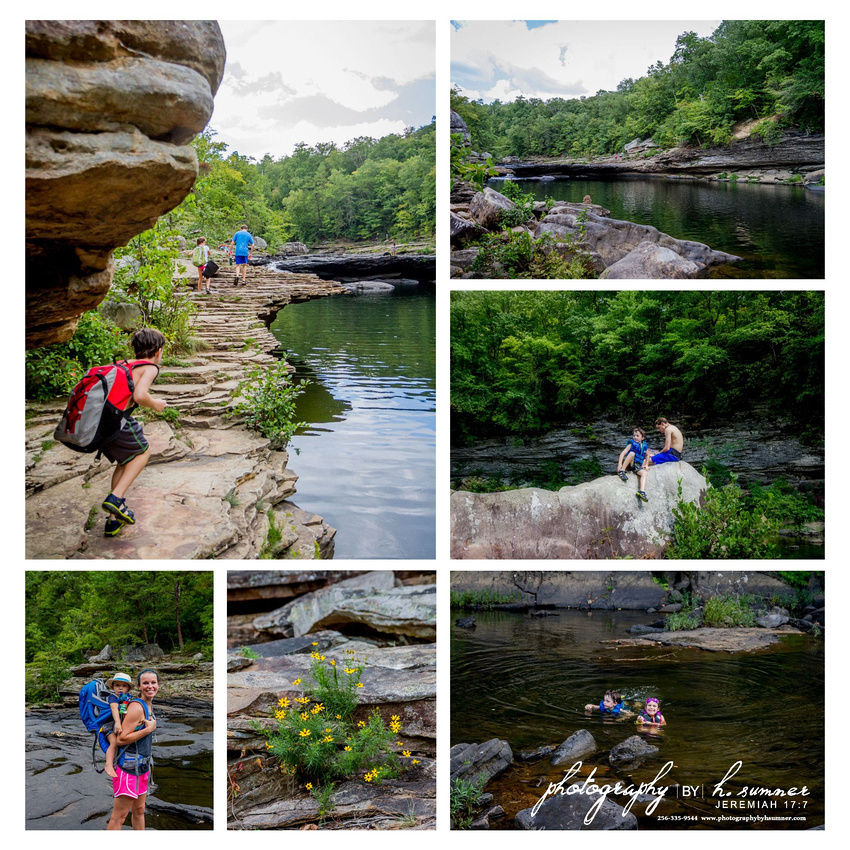 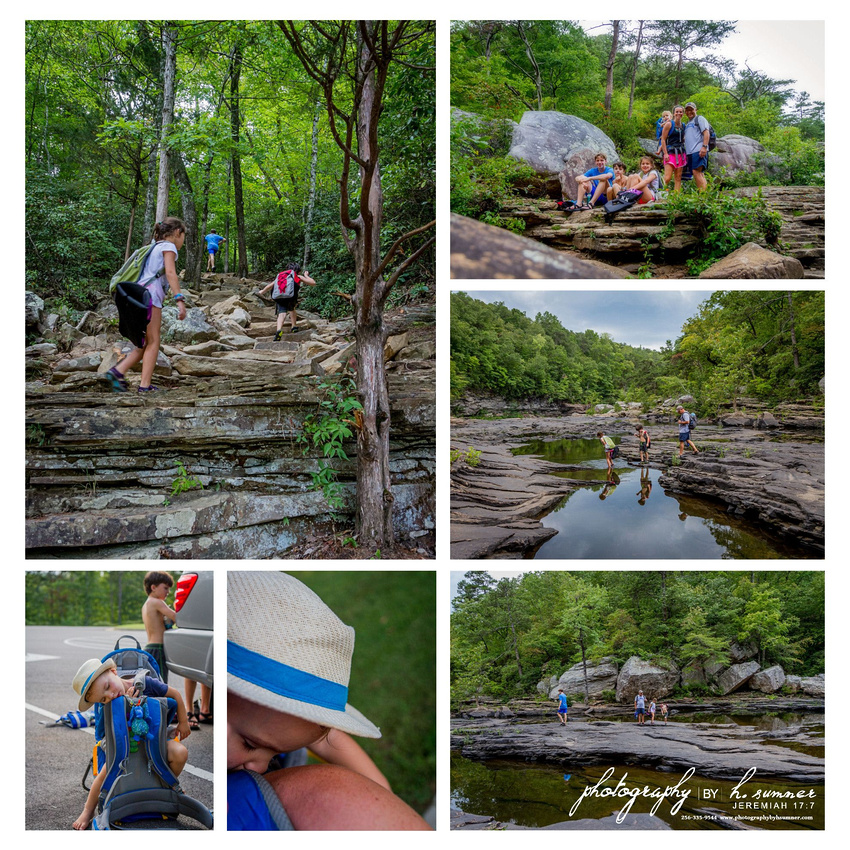 After Marth's falls we drove half of the Canyon rim on 176. There are numerous places to pull over and snap the traditional photos that you see from this area if you google it :) 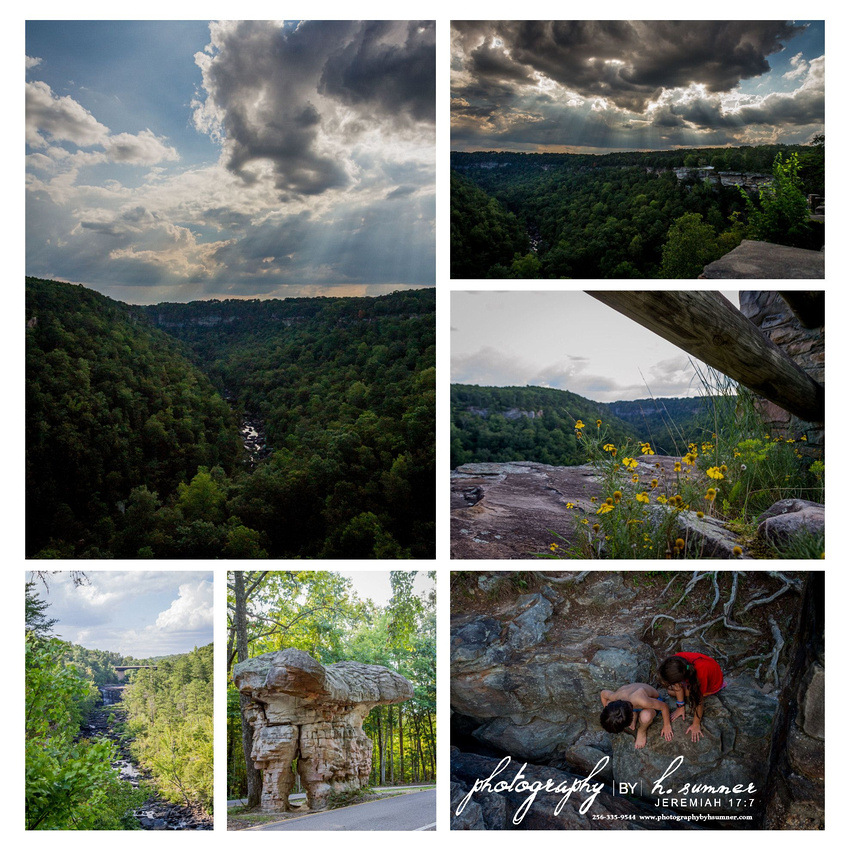 We headed back to camp night 2 at Tranquility. I can't believe these are the only two photos I took of camp life :) Nathan building card houses and Joseph's little place to sleep. Kiddos had hammocks hung, mom and dad cooked a fabulous dinner, and we enjoyed our camp set up. 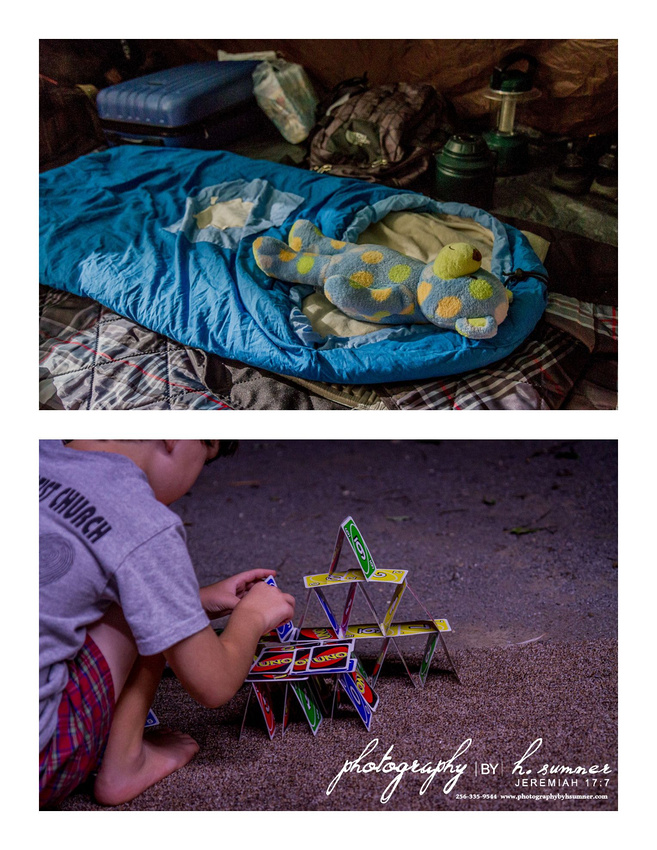 From where we camped you could hike a 3/4 mile trail to DeSoto falls. My mistake in a fork cost us another half mile, but we still made it and well worth the hike. I DO NOT endorse this first set of photos. Physically nauseated...I don't do heights, or overhangs with nothing to grab. This was above the falls. My crazy husband had no worries though and even let each kid, one at a time, look over the edge. I never would have forgiven him if one fell but he claims they were all safe. Credit to him for the photo of the falls from this angle. No way was I standing on that ledge to take it. It is a very very long way down... 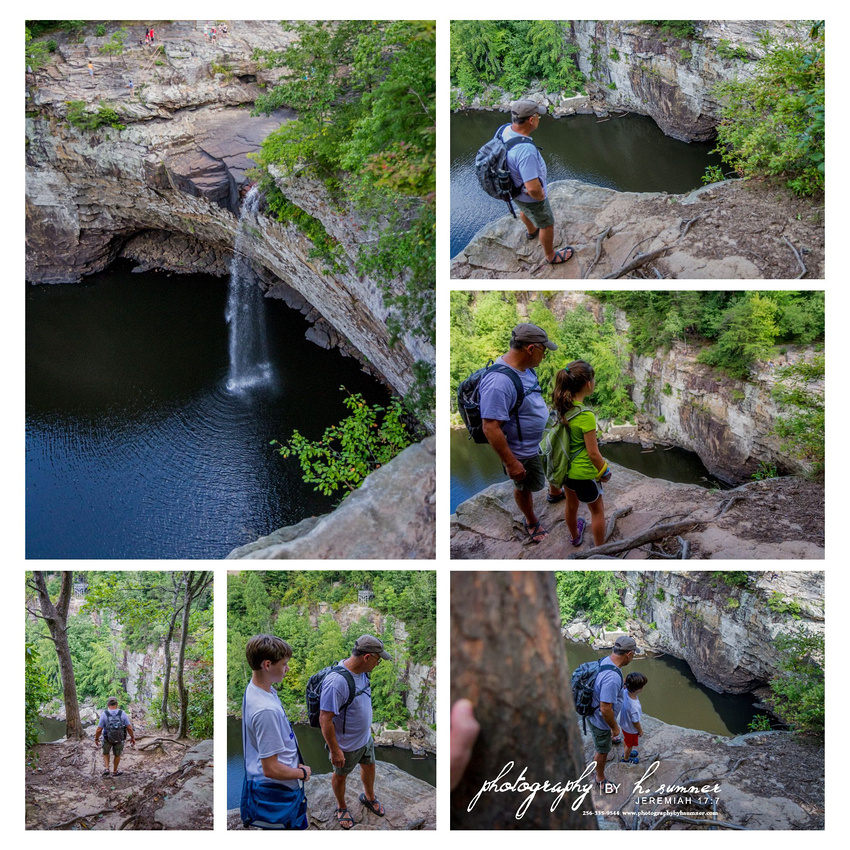 We could see all the people who parked vehicles and looked at the falls from that point. We were told from the camp ground we could cross the dam and visit the center there to do the same however we were limited in time and I wanted to try and find the bottom of the canyon. From this point we took a trail away from the falls which led to the bottom. Probably another not so wise decision, but the view was worth it. It is a climb down. Literal climb. At one point we had to unstrap Joseph and pass him down in his carrier because getting down with him on my back was not an option I felt comfortable with. At the same place back up I had to be shoved with Joseph saying "hold mommy...hold" because I couldn't pull up enough. Getting out was a have to and falling back not an option :) We were safe though in my opinion, thanks to Dave. Clayton helped the other two littles and they didn't seem to struggle a whole lot. I was not a sheer climb, but not one with free hands either. 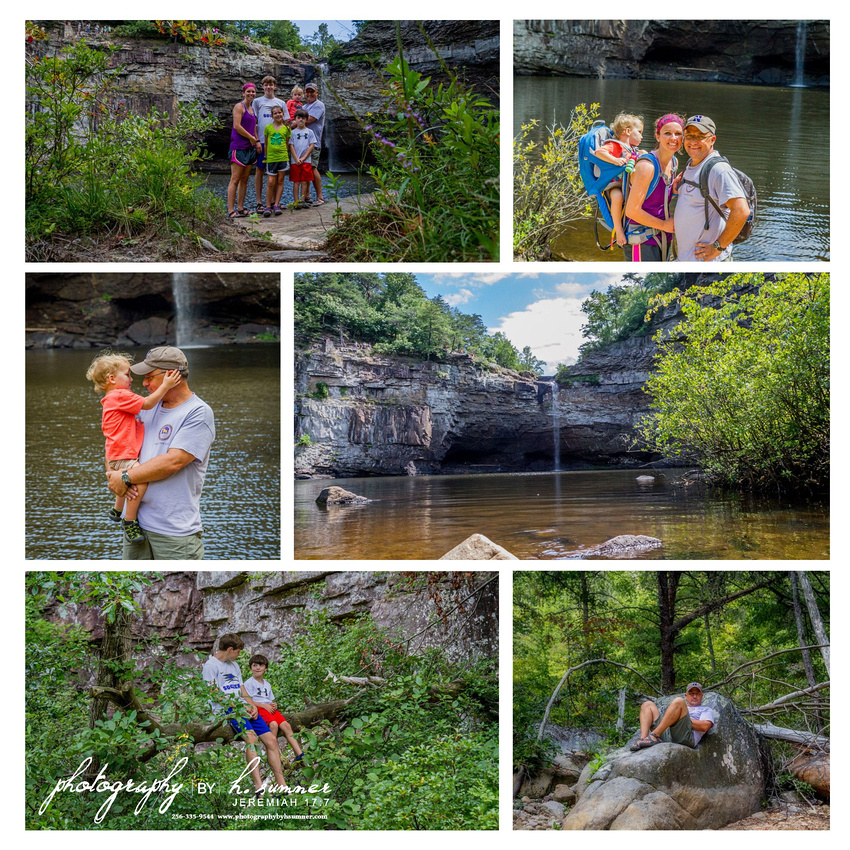 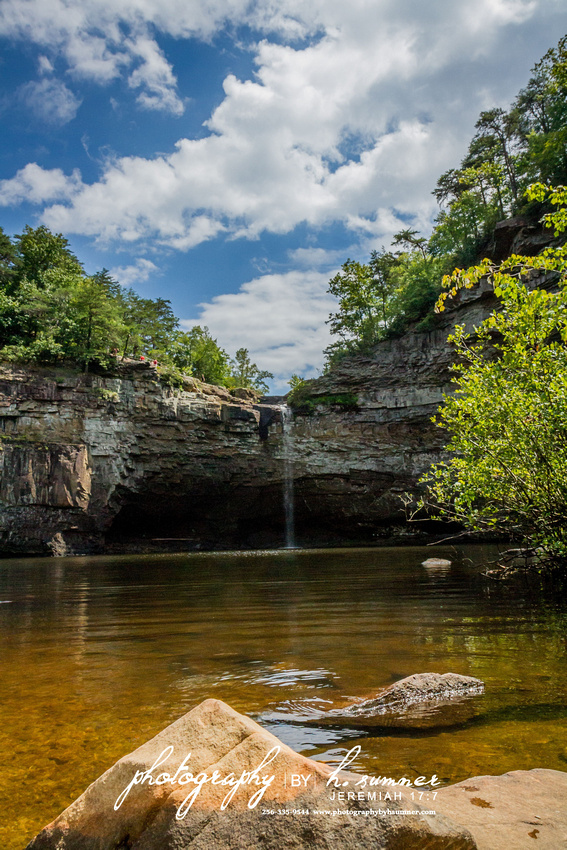 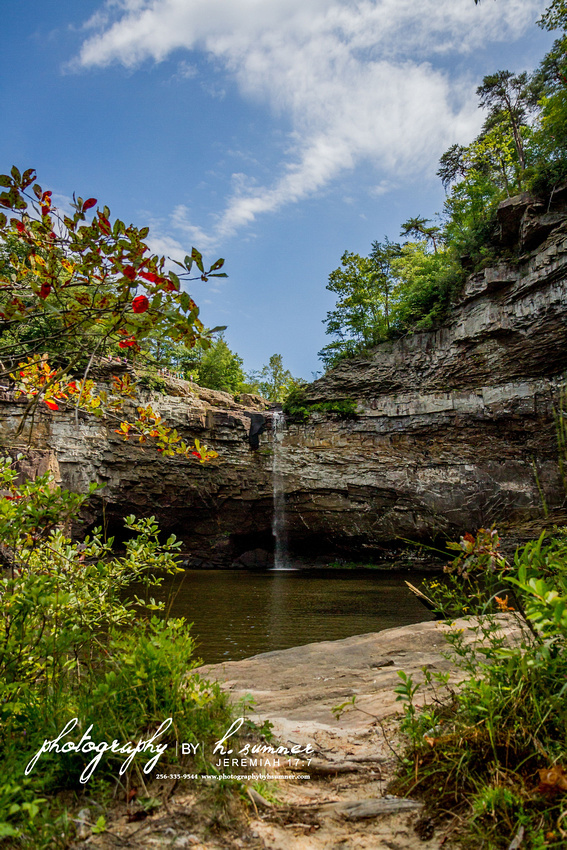 Our family enjoys exploring and I've been so impressed with the State Parks and National Preserves we were able to see this summer. We hope to expand our adventures each year...maybe lol...ask Dave ;) Camping is slightly expensive on the front end but it is definitely a great and inexpensive way to explore beautiful places. This is the 6th State Park this summer that we visited and most within a day or less driving distance. DeSoto and Little River Canyon are beautiful and we hope to return at different points of the year such as fall with colorful leaves and in the spring with higher water levels. I enjoyed photographing what we saw. Not ideal...I would love to capture the different falls at sunrise/sunset lighting, but definitely perfect for capturing the images we have of the places we explored together as a family :)

Karen King(non-registered)
As always, Hannah, your pictures are absolutely breathtaking! I especially love the Little River Canyon pics....since I grew up not far from there. It was "the" place to go, even way back then! Thanks for sharing. :)
No comments posted.
Loading...
Subscribe
RSS
Recent Posts
Always Enough True Value Into the Wilderness Confessions of a Coffee Roaster You Have Taken Account of My Wanderings Here's to 2020 As A Man Speaks With His Friend... We Shall Not Cease From Exploration To Strive, To Seek, To Find Great Exuma 2018
Keywords
personal photography Lauderdale County Portrait Photographer weekly favs landscape photography 52 week project birth photography newborn photography alabama waterfalls Contest
Archive
January February March April May June July August September October November December
© Journey Steps Photography: Births, Landscapes, Portraits
User Agreement
Cancel
Continue